“Maybe there is a beast……maybe it’s only us.”

A ghostly tale for Halloween…..has our beloved Grassy Island been inhabited by evil spirits?

…….Lord of the Flies William Golding

I opened my eyes and felt restless, needed to go exploring. The wind was blowing from the southwest but was high, which made it a little tricky to land the boat on some of my favourite islands. I decided that I wanted to explore a favourite childhood haunt, Grassy Island and my husband headed the boat in that direction.

“He began to dance and his laughter became a bloodthirsty snarling.”  William Golding 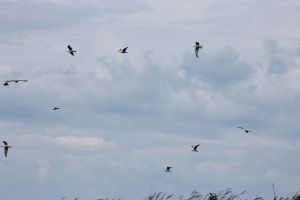 GO BACK FROM WHERE YOU CAME!

“Fear can’t hurt you any more than a dream. There aren’t any beasts to be afraid of on this island….Serve you right if something did get you, you useless lot of cry-babies!”  Lord of the Flies William Golding

“There were no words, and no movements but the tearing…

carolfromthecove After living for 30 years in the city, I now live in a tiny house on the northeast coast of Newfoundland. While there are some things I dislike about this lifestyle, for the most part I embrace it. I like hiking, reading, writing, theater, music, floral arranging, a simple lifestyle and love my crazy family. My goal in starting this blog is to encourage more people to hike and to show you our beautiful Newfoundland trails.......and occasionally trails in other parts of the world. Happy Hiking!
Published October 29, 2016