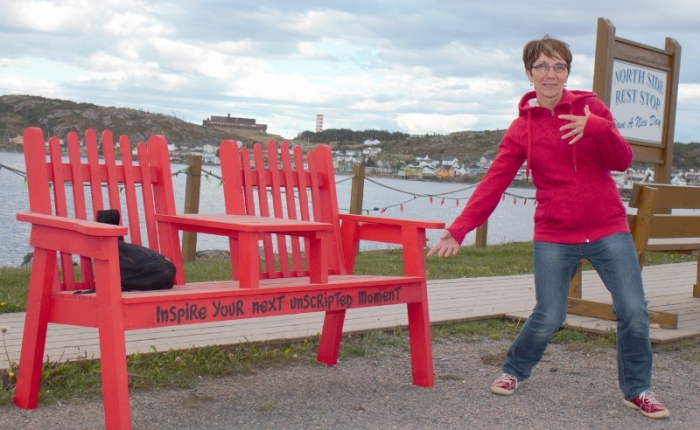 ……………… when I spend it walking I am pleasantly tired. In Praise of Walking by Thomas A. Clark

Having moved from the city back to the small outport community where I was born, I was a little concerned how I would find places and venues to meet my cultural needs. I had to look no further than Twillingate which has the added bonus of many great hiking trails.

Almost every evening you will find 5 or 6 photographers from all over the world gathered with their tripods on this little headland by Sleepy Cove trying to capture the sunset, whales, surf, icebergs or just the total experience of this magnificent place. 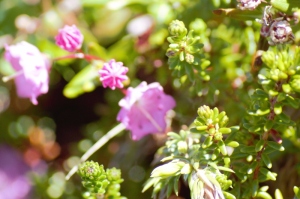 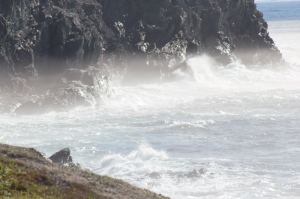 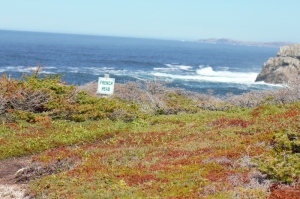 “In the course of a walk we usually find out something about our companion, and this is true even when we travel alone.”  Thomas A. Clark

…….I say that Spirit is only separated by a heartbeat.”  Marie Eastman, Exploits Native Women’s Drummers

(With the reopening of the Beothuk Interpretation Centre and all its amazing events for the season, I thought I would re blog this post)

I attended a  Healing Conference at the Beothuk Interpretation Centre in Boyd’s Cove on Thursday October 15/15 and it was amazing! Karen and all her staff provided good food and a day to remember.  Chief Misel Joe of Conne River led the Conference with humour, while giving spiritual and educational guidance. Participants came from Trinity Bay, Springdale, Steady Brook and various places in Notre Dame Bay. It is one of life’s ironies that we sometimes know someone all of our life and feel no real connection, while sometimes we meet a stranger and there is an instant affinity.  Such was the case on Thursday, our group connected very early in the day.

Our day began with a Smudging Ceremony held in the Spirit Garden and performed by Chief Misel Joe.  This was my first time experiencing this ceremony and I found it quite moving.

Our brothers and sisters, the Beothuk People

once lived and worked on this sacred site.

We pay our respect to their Spirit that

remains within the land and this sacred site.

Our medicine walk took us along the beautiful trail by the Interpretation Centre and Chief Joe collected seven natural medicines to be brewed later in the day.

The trail is so peaceful and beckoning now, and we can only hope that the Beothuk people can feel our  sorrow and sadness for what was done to them.

At the end of the medicine walk, some of us returned to the Centre to reflect and discuss what we had encountered on the trail. Others decided to continue on and visit the sculpture of Shanawithit created by Gerry Squires. Please visit http://wwwheritagenf.ca and click on Images to learn more about this fascinating story.

We walked down the trail and quietly she emerged through the trees. I was in awe. Shanawithit stands so tall, strong and proud and at one with her surroundings. There is no ostentatious, loud plaque to announce her place here. The storyboard is on the opposite side of the trail and blends in with its surroundings. Gerry Squires was in tune with what needed to be done.

“Of the two wolves who are constantly fighting inside all of us,

Only the good wolf can be fed here.

The Spirits want it this way.”

The afternoon was comprised mostly of a Storytelling Circle led by Chief Joe. Simply put, it had four parts. First the Talking Stick was passed  around the circle with each of us telling a little about ourselves, then it was passed  in the opposite direction and we told of something or someone in our past who had changed us, then Chief Joe gave each of us a word and we had to tell a story using that word….no rehearsal, no exchanging of ideas, just tell a story, and  lastly we gave away our little gifts. The spirituality, sadness, healing and laughter brought us all together in this little circle.

When we had registered for the Conference, Karen asked us to bring along some item that meant something to us and this would be used as a gift for someone in our Storytelling Circle. She also said that at the end of the day we would know who should receive our gift.

I brought a little, colourful painting that I had won at an auction the previous year. The painting was done by Sam Stairs whose parents operate the Citadel House and they host various musical talent throughout the year. Last year during one of their concerts, they had a silent auction to raise money for the Oncology Unit at the Janeway Hospital in St. John’s. There were a number of items donated and each of the Stairs’ children did a piece of art to help raise  funds.  Their son, Sam did a mosaic of lovely colours and had it framed. I put in a bid and was lucky enough to win it! I chose this special painting to give away, and yes, when the time came, I knew who should receive it.

I received a lovely little red Buddha which was truly meant for me and amazingly, Linda knew this.

We were also encouraged to leave an offering in the Spirit Garden. There were various items from nature and some pieces of coloured cloth in baskets from which you could make an offering and take down to the Garden. I chose a piece of birch rind, a mussel shell, and a piece of blue cloth (to represent the sea and the beautiful October sky) and strung them together to make an offering to an outstanding woman, my aunt, Hettie Sarson. She died in August at the age of 98 and had an affinity with the Native People and indeed all people.  I hung it on a branch facing out to sea because as her grandson Michael wrote “She (Hettie) was kind, but she had the grey air of the Atlantic about her and she wore that kindness with melancholy.”  Perhaps her spirit is now back where she was born and somehow intertwined with that of Shanawithit. 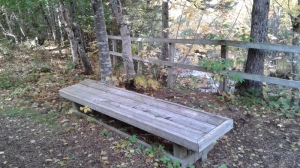 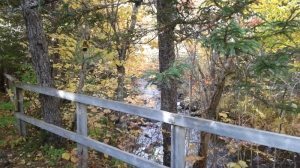 In 2013 we visited Fogo Island for the first time in a number of years and what a lovely mini vacation it was.

So much has been written about this amazing inn and it is truly fabulous. I love the way Jonny Harris of Still Standing described it recently….”it’s the only place you can stay and sleep under a quilt made by nan and use a toilet designed by NASA.”

I did several hikes on this trip, all a delight.  Brimstone Head, Fogo Head Trail  and the Lion’s Den Trail.

Lion’s Den Trail was my favourite and the most riveting to all my senses. At the beginning of the trail we met an older couple who had come together later in life, both having lost their spouses. We were talking to the man for a while and he told us he had nine daughters. My husband (we have two daughters) made some joke about living in a household with all females. “Yes”, the man said, “people have said to me, I don’t know how you survived raising 9 daughters!”

The trail meanders through old, abandoned settlements and around every corner and rock outcropping there is a view that really stops you in your tracks. The seascapes, wildflowers, sea breezes, and rock formations all add to a day of wonder. 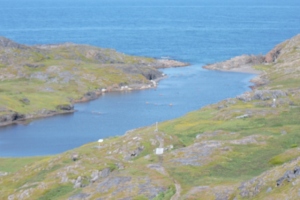 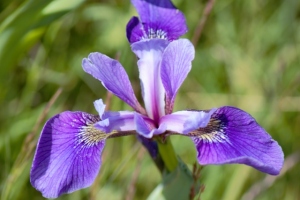 On this hike, I also ‘discovered’  Eliza Lewis.  This sign in Eastern Tickle piqued my interest.

I was fascinated by the fact that a young Newfoundland girl had gone to Argentina in 1914. Why? How?  After a little research, I tracked down the company who had made the film Letters From Eliza and the producer was none other then Dave Quinton of Land and Sea fame. He was so generous in tracking down a copy for me.  An amazing film, an amazing story. I contacted Fogo Island Inn and gave them the information. I really hope they followed up and now have the film in their media room. Seems fitting that Eliza’s story be told there.

“There are walks on which I lose myself, walks which return me to myself again.”  In Praise of Walking by Thomas A. Clark

………to the intelligence from all the senses.  Looking, singing, resting, breathing, are all complementary to walking.”    In Praise of Walking by Thomas A. Clarke

As a child, I spent many summer holidays in Traytown and fell in love with the area and my ‘other’ cousins. I often heard my mother talk about  Ken Diamond and, what a treat it was to ‘find’ this park named after him. It is located in Glovertown and I visited there in the fall. This hike was indeed a treat to all my senses. 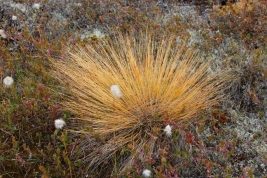 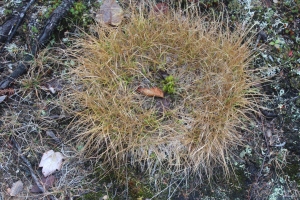 Walking on the boardwalk that crossed over a bog gave me a chance to see plants and grasses that I would not normally have noticed, and the earthy smell was intoxicating.

….and a smile never hurts.

Glovertown is also home to House of Diamonds which is the former home of  Ken Diamond and now showcases some amazing art. I believe they also hold concerts and what a lovely venue it is! For me that would be an ideal day….hike the park and then sit and listen to some fabulous music.  You never know what you will discover until you walk to it. 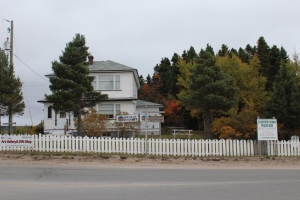 This whole area is just so comforting and peaceful. 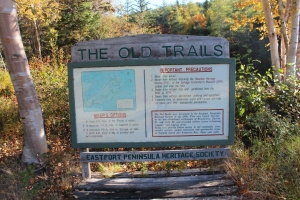 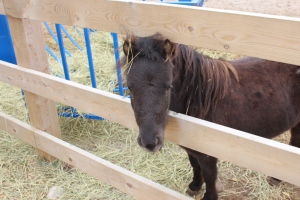 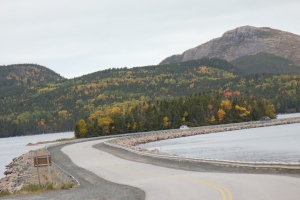 I do believe October is my favourite month.

…….In Praise of Walking by Thomas A. Clark.  If I start a hike with a troubled mind, slowly with each step, some clarity returns.  Some days because of the swirling cauldron, it may take a longer hike and thus more steps:) Walking in itself is a meditation and requires very little, just give yourself up to it. You can, for the most part, just use common sense and your sense of wonder, and a new world opens.

Some years ago we camped at Bellevue Beach and decided to go for a walk. It turned into a long hike, down the beach, around a little triangular headland and through various types of vegetation…but oh the amazing things we discovered!

Aardvark or anteater? According to the Dictionary of Newfoundland English it is a cronnick or crunnick…a tree or root killed or much weathered by wind. I did not know this at the time, but was totally fascinated by it.  I sent the photo to my brother, SH, who immediately replied “my dear, it’s a crunnick!” and referred me to the Dictionary of Newfoundland English! You also learn new things on a hike. 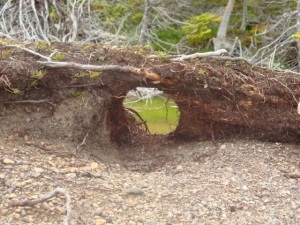 On this same hike, I came across this and I still don’t know how this perfectly round hole was formed. It’s so good to grow young.