To walk in nature is to witness a thousand miracles.

A beautiful fall day is made for hiking….so off we went to Cottlesville to walk this very interesting trail.

I am sure nature lovers and foresters world wide would be amazed that a new species of tree can be found on Newfoundland’s northeast coast! The glorious Shoe Tree.

I cannot endure to waste anything so precious as autumnal sunshine by staying in the house.

………..fun reading, but the trail is really not difficult.

My favourite…….thankfully there were none today.

I have questions without answers…………how were these all formed? 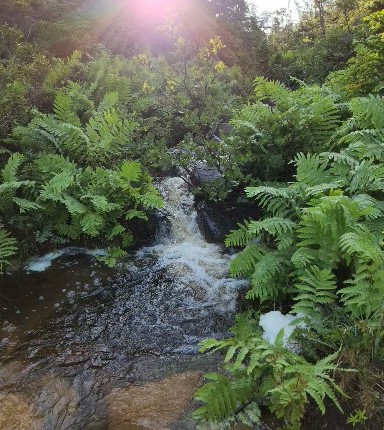 This trail has been on my bucket list for a number of years and I finally hiked it. It is 9.5 km return and I was definitely in my happy place as I walked through its varied and amazing landscape. Located approximately 3 km from Trout River on Route 431, the trail makes you feel as if you are entering no man’s land.

These rocks were tossed during eruptions more than 550 million years ago!

The trail zig-zags down hills and valleys and you are surrounded by the sounds of running streams and brooks and birds flying and chirping.

The contrast……..from rock strewn land to beautiful greenery is an early morning delight.

Going down to Old Man Cove.

I would love to take this piece of art home.

Up from the beach, and the meadows and ferns are more treats in the early morning sun. The people from Trout River let their sheep graze here. Walking through the jungle of gorgeous ferns, we arrive at Steve’s Cove.

The Green Gardens area features volcanic rocks formed during eruptions more than 550 million years ago. These eruptions occurred as an ancient continent split apart and an ocean formed.

Early one morning, any morning, we can set out, with the least possible baggage, and discover the world.

In Praise of Walking by Thomas A. Clark 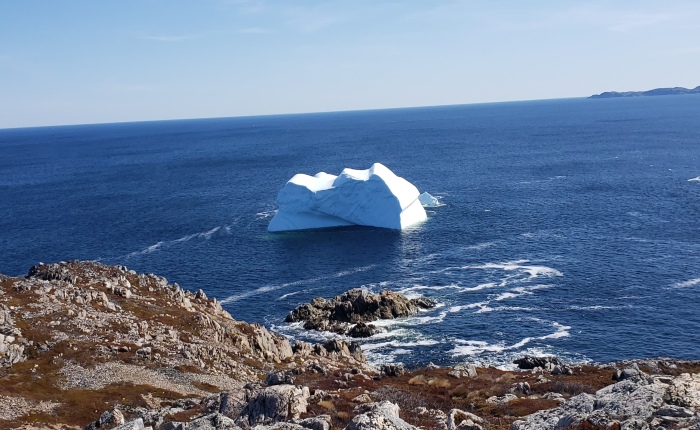 Weather in Newfoundland can surely drive one mad! Here on the northeast coast, we have had a cold, dreary April and snow flurries in May. This is not unusual. However, the week to date has been exceptionally beautiful and today I donned my hiking boots and headed for Twillingate. I met Christina there and we set off on a to-die-for scenic hike.

A walk in nature walks the soul back home.

The blues of the ocean and sky are intoxicating.

Walking and exploring are among my favourite things to do.

Hiking is cheaper than therapy. 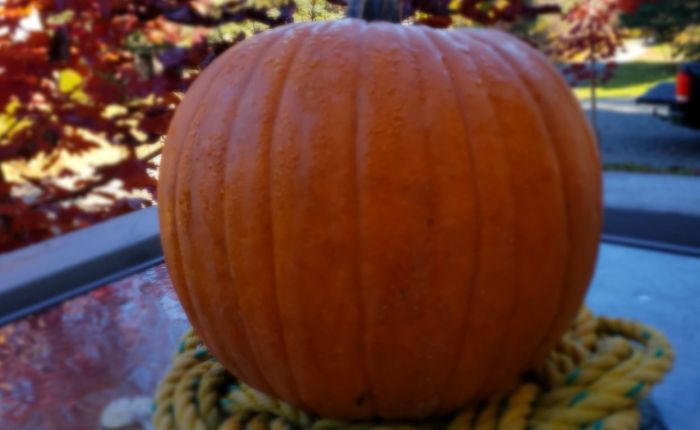 Fall is my absolute favourite season. I am rather new at this gathering and preserving and to my surprise, I like it. I love experimenting with herbs and trying many of Newfoundland’s vegetables and fruits in different ways. Black Currants in a green salad, partridgeberries in stuffing, apples in soup stock, pears in stir fries, turnip fries, zucchini fries, roasted beet, roasted carrot and apple soup, hot peppers in cabbage rolls, damson jam with very little sugar, etc.,etc.

This plant was given to us by a friend. I had never heard of them.

”Aunt Molly Ground Cherry is an outstanding variety that originated in Poland. Fruits are 1.3-1.8cm(1/2” to3/4”) in diameter. Fruits mature to a golden orange colour and drop to the ground in their husks when ripe.”

Slow cooker applesauce and autumn, a combination that works well.

I was becoming a little distraught because of our having a very wet and foggy October here on the northeast coast but October has reaffirmed my belief in her today, and I can honestly say:

I’m so glad I live in a world where there are Octobers.

Driving along the Northern Peninsula highway (Viking Trail), we decided to turn off at Broom Point. Broom Point is a restored fishing premise in Gros Morne National Park. I wasn’t overly excited about doing this, thinking this would be more a thing for tourists. In the parking lot we found a lovely surprise, two signs, one showing Broom Point and the other Steve’s Trail.

A very short trail but so worth doing.

………..and finding surprises along the way.

Like us, this grouse was just out for a walk on this wild, windy day.

And into the forest I go, to lose my mind and find my soul.

We come to the end of the trail to a blustery, wind tossed ocean.

This is my happy.

We decided to explore further and increased the length of our walk.

Caves and rock formations to boggle the mind.

I’ve seen the devil’s footprints in Keels Newfoundland, dinosaur tracks in Chile and now (Identified by me:)), sea monster tracks on the Northern Peninsula.

Never lose your sense of wonder. 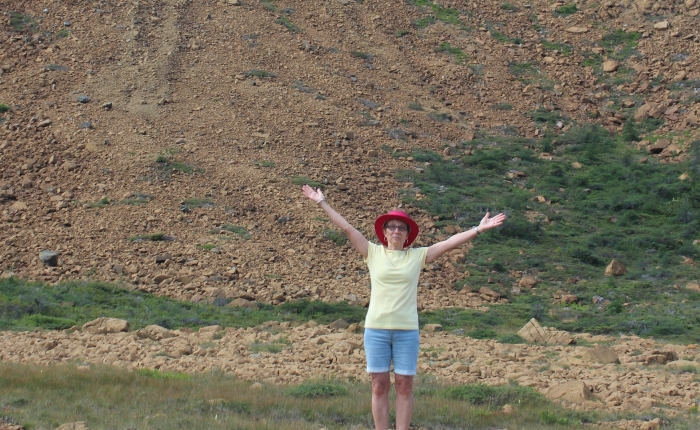 The Northern Peninsula of Newfoundland and Labrador is an all consuming feast for the senses. The Tablelands are a geological wonder, but first let’s see a little of delightful Woody Point.

A small, but lovely RV park just outside Woody Point and it has a Little Free Library!

A cozy little cottage with just a bed and an amazing view.

Then on to Woody Point for a little hike which we extended by walking around the town.

Is there anything that is better than to be out, walking, in the clear air?

In Praise of Walking by Thomas A. Clark

So, so glad my husband is using his camera again. Driftwood art.

Then, a short distance away a totally different kind of beauty is found in the Tablelands.

After Saturday’s heat and humidity, the much cooler temperatures made perfect conditions for doing this hike yet again. The trail has had upgrades since we hiked it two years ago.

Interesting? Deposited in what Age?

I would rate this trail as moderate, hiking pole recommended. I loved the cold ocean air after the humidity we had experienced previously.

Susan is from Alberta and fell in love with Change Islands some years ago .http://jensu.ca

This private summer residence is a colourful sight as you cross the tickle. We spent a great evening here with family and friends.

Catch the ferry at Farewell and go explore Change Islands.

I was one of many, many homes here in Tilt Cove. It was once a thriving town with all the amenities. Tilt Cove was first settled in 1813 and experienced two mining booms, from 1864 to 1917 and again in 1957 to 1967. At one time the population rose to approximately 2000. We even had a large facility that had two bowling lanes, two curling lanes and a separate area for a lounge and bar. We had work, music, laughter, parties, children, churches, great hunting, fishing, beautiful scenery, stunning ocean views and an overall prosperous community.

As with other early Newfoundland mines, the first Tilt Cove miners came from Cornwall, Wales and the mining techniques closely resembled those of the Cornish mines. Cable or ”Swansea” cars carried the ore down from the mine site along a tramway to a two storied pier where vessels waited to take the ore to the copper smelters in Swansea, Wales.

The lady who lived in the house below died a couple of years ago at the age of 92. She was the only one living on this side of ‘town’.

” She was a tiny little woman who loved to play the accordion and lived alone in this house for a number of years. She came home one day and the road on this side of the town wasn’t plowed. She climbed over snowbanks, used the ladder on the back of her house to get in through an upstairs window and called the mayor the next morning to come and shovel her out!” said a summer resident who used to live here.

We came here to visit this tiny town on the Baie Verte Peninsula because I wanted to see the monument that had been erected to the passengers and crew of the Queen of Swansea. A shipwreck and incomprehensible horror story that played out on Gull Island, not too far from Tilt Cove on December 12,1867.

https://www.goodreads.com Desperation: The Queen of Swansea by Gary Collins

A summer resident pointed us in the right direction and we climbed the 65 stairs to the overgrown cemetery.

After some careful foot manoeuvres, my husband eventually found the monument. The cemetery is very overgrown and tricky to explore.

Come to Tilt Cove and hear the voices, feel the past in your walk-about, let your imagination wander and learn from the earth and wind. 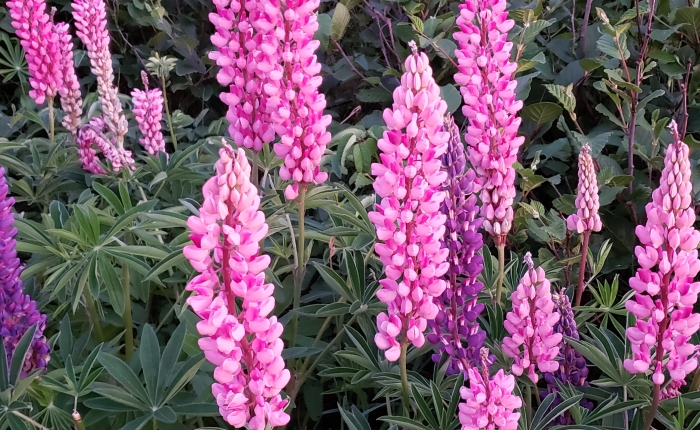 We arrived in La Scie on a wet and cold Canada Day and stayed at Island Cove RV Park. We soon met Doug, Park Manager, I believe, and doer of all things. He brought us several print outs of hiking trails in the park and further down in La Scie.

The weather cleared around 3:30 and although it was still chilly, it was perfect for hitting the trails.

The French influence from centuries ago is quite evident in the signage all around town.

None of the trails are long and except for Boone’s Hill are easy/moderate.

Still overcast and cold but walking and hiking is a great way to stay warm, get exercise and explore something new.

Boone’s Hill is not a difficult hike, but it does have approximately 200 steps to the top lookout.

The walk around La Scie Harbour is beautiful.